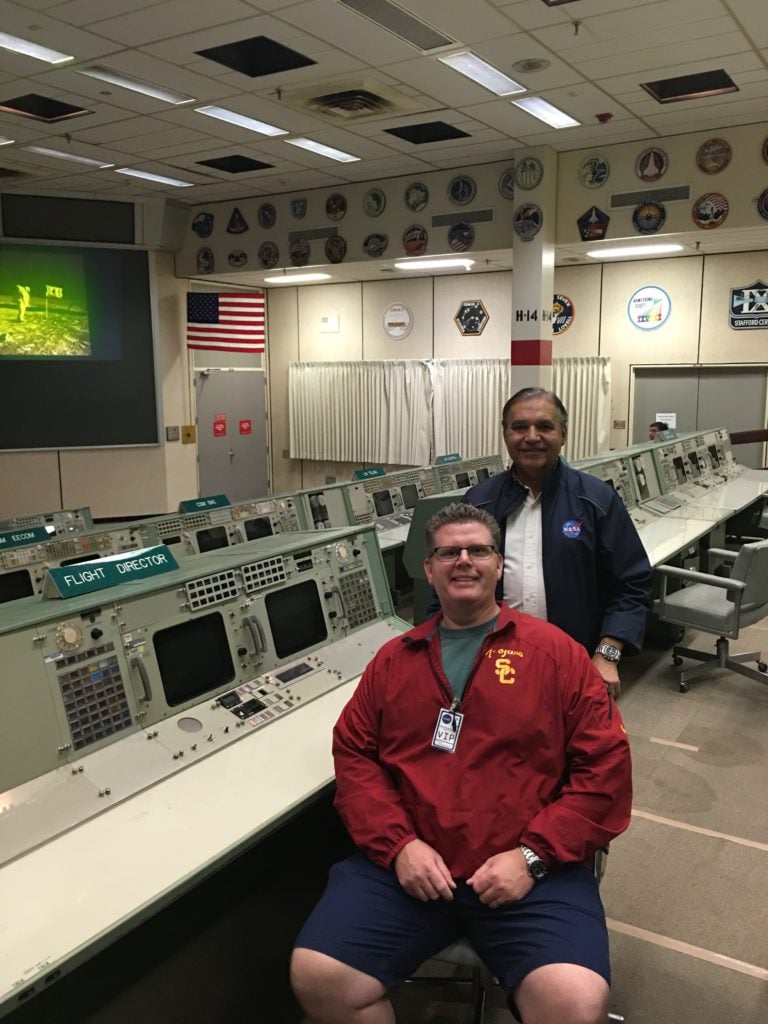 What I learned from a NASA Engineer

This past week I was visiting Houston and had the opportunity to join a Level 9 Tour.  A Level 9 Tour is a more private tour with a maximum of 12 people in a private van, no lines, lunch in the astronaut cafeteria and closer and more private looks at the campus.

As we were waiting for the tour to start, I noticed a banner highlighting a NASA employee and his book written.

When the tour guide introduced himself as David, handed us the VIP badges, and pictures for security, I recognized him from the banner highlighting his book.  He was making small talk as we were waiting stating that he did not know how we got stuck with him on this tour and asked if we had any questions.  I spoke up saying “Mr. Cisco (David L Cisco is his name) the book you wrote highlighted behind you is it that you or resemble that person.”  He laughed and his humility exuded from him and we learned much more as the tour went on.

We went to many different behind the scenes areas that others were not allowed to go.  Everywhere we went all NASA employees knew him, some called him boss and I just continued scratching my head asking, “Who is this guy?”

The final stop of the tour was the historic Mission Control where the Mercury, Gemini, Apollo and some Space Shuttle missions were directed.  As a commercial pilot and flight instructor and avid space nerd (in fact as I write this I just noticed I am wearing an Apollo Mission t-shirt with 1 through 17 depicted) I was in awe of the history that took place in this room.  The victories.  The defeats. The tragedies.  This is where David pulled out his tablet and starting sharing his story and history with NASA.  He was an engineer associated with the Lunar Lander (LEM) project as well a milestone and receiving the Golden Snoopy Award presented to him by Astronaut Al Bean.  The Golden Snoopy Award is only held by approximately 0.04% of all NASA.  In order to earn you have to contribute to a mission in an extraordinary way.  His contribution was with Skylab mission.  When Skylab was launched a heat shield was ripped off and the temperature inside Skylab was about 40-50 degrees too hot to inhabit.  He chimed in and stated if they use the similar material which protected the LEM from heat and elements it can be taken to Skylab and expanded over the whole top the space craft.  It succeeded and dropped the temperature.  The rest is history.

You may ask why I am providing a history lesson.  I have to lay the ground work for what I learned from David L Cisco.  I read his book cover to cover back in my hotel room and was amazed at his story.  You can get info on it here, http://davidlcisco.com/.

David beat all odds from a persistent driven young man to an amazing representative of NASA.  I re-learned that persistence, drive, passion, and a never give in attitude is recognized.  He became a trained engineer and placed in some amazing projects that he flourished in.

As a leader, I always look for ways to grow and hone my craft.  David kept referring to him as one of four hundred people at NASA that helped solve problems.  I took away not only humility here but anyone in a company has an opportunity to shine when driven and given the opportunity to shine.  I pray that you as a leader of your organization can grow and.  This story, his success, his failures and his passion for what he does is exhilarating to any student of leadership.  I encourage you to read this book.

What I learned from the Second Man on the Moon

As an aviator, of course I was excited to meet, talk with and learn under the second man to step on...
Read More

What I learned from Michael Oher

We all know Michael from the movie “The Blind Side” and his Super Bowl win with the Ravens and his...
Read More

We are pleased to announce Trinity Networx, LLC has ranked on Channel Futures 2022 NextGen 101, an...
Read More